Here are some traps when you are playing White:

White offers a pawn, and Black does not know that it is poisoned. 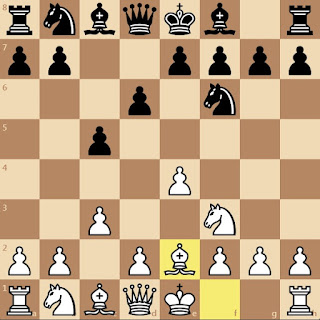 No matter how Black replies, White gains a Knight. 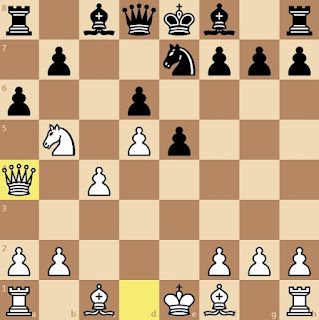 Posted by Jun Fuderanan at 7:40 PM No comments:

We are going to orient our chessboard on the Black's side.  Here are some common traps when you are playing Black: 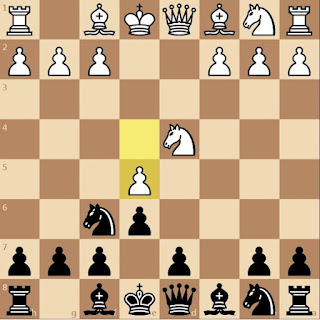 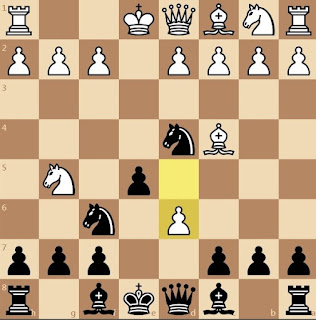 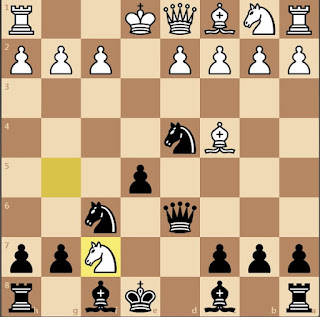 White now attacks the Bishop and the g2 pawn.

What happens if the Bishop takes the f7 pawn at move 7?

If 8. Bc4 then Black replies with Qc6 attacking the Bishop and the b7 pawn.

After this position, Black is relatively more mobile than White.

Posted by Jun Fuderanan at 7:04 PM No comments:

The Benko Gambit (or Volga Gambit) is a chess opening characterized by the move 3...b5 in the Benoni Defense arising after:

1. d4 Nf6
2. c4 c5
3. d5 b5
Black sacrifices a pawn in order to gain rapid development.  Apart from this, Black also obtains fast development and good control of the a1–h8 diagonal and can exert pressure down the half-open a- and b-files. These are benefits which can last well into the endgame and so, unusually for a gambit, Black does not generally mind if queens are exchanged; indeed, exchanging queens can often remove the sting from a kingside attack by White.
The following game was actually played by Yury Nikolaevich Shaposnikov vs. Georgy Bastrikov in 1954:
1. d4, Nf6
2. c4, c5
3. d5, b5
4. cxb5, e6
5. Nc3, exd5
6. Nxd5, Bb7
7. e4, Nxe4 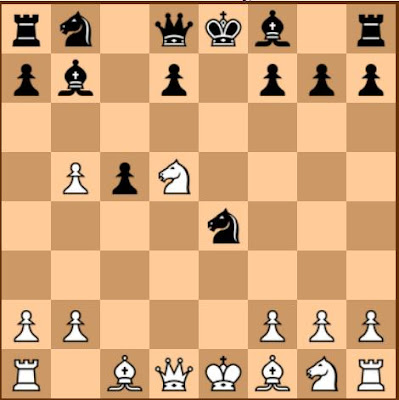 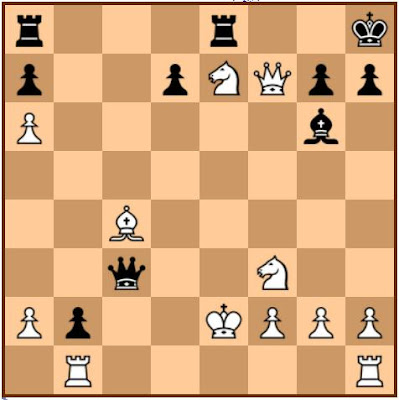 Posted by Jun Fuderanan at 11:27 PM No comments:

The Halloween Gambit (also known as the Müller–Schulze Gambit or Leipzig Gambit) is an aggressive chess opening gambit in which White sacrifices a knight early on for a single pawn. The opening is an offshoot of the normally staid Four Knights Game and is defined by the moves: 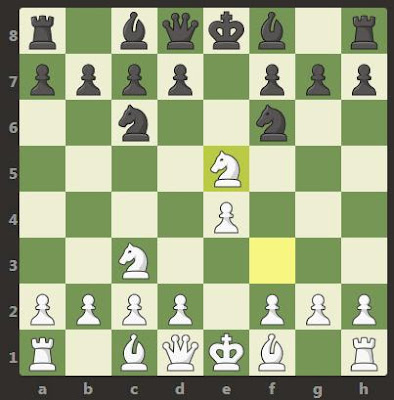 White's objective is to seize the center with pawns and drive back Black's knights. After 4... Nxe5, White usually plays 5. d4 (5.f4 does nothing for his development), after which Black can retreat the attacked knight to either g6 or c6.  (Source:  Wikipedia) 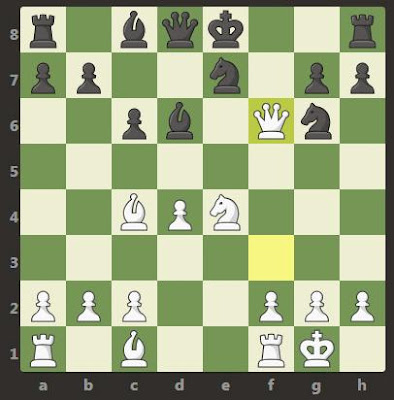 The Scotch Gambit is an older relative of the Göring Gambit, reached via the moves 1.e4 e5 2.Nf3 Nc6 3.d4 exd4 4.Bc4, or sometimes 2.d4 exd4 3.Nf3 Nc6 4.Bc4 or 2.d4 exd4 3.Bc4 Nc6 4.Nf3.   Instead of offering the gambit immediately with c2-c3, White plays Bc4 first, keeping open the option of recapturing the pawn on d4.  If Black is not careful he or she can be confused by the various transpositions and end up in a poor line of the Göring Gambit.  The move 4.Bc4 also covers the d5-square, which prevents Black from equalizing with 4...d5 (an effective counter to the immediate 4.c3).

The main drawback of White’s move-order is that the e4-pawn is unprotected, and Black’s most reliable responses involve targeting the e4-pawn with 4...Nf6 (transposing to the Two Knights’ Defense) and 4...Bc5 5.c3 Nf6 (transposing to the Giuoco Piano).  Black can also transpose into a line of the Hungarian Defense with 4...Be7.  On the other hand, this means that the Scotch Gambit is a good way for White to steer play towards a standard Italian Game while avoiding the solid lines in which Black plays to reinforce the pawn on e5 (for after both 1.e4 e5 2.d4 and 1.e4 e5 2.Nf3 Nc6 3.d4, Black has no good way to maintain the pawn on e5).  (Source: 50webs.com)

One of the main lines of the Scotch Gambit. 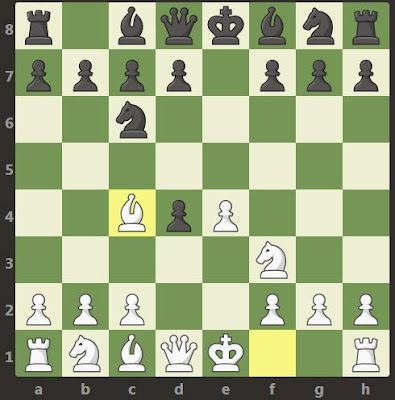 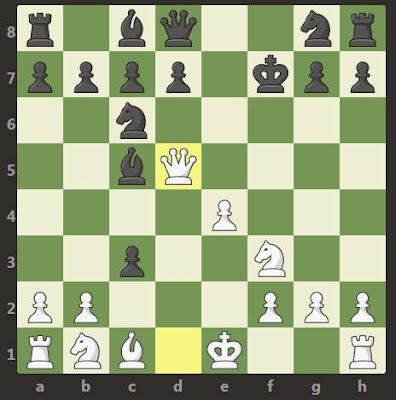 Posted by Jun Fuderanan at 6:56 AM No comments:

The Cochrane Gambit was named after John Cochrane who was a nineteenth century Scottish chess master. And he was a strong one too, ranked only below Howard Staunton who is very well known for his design of the chess pieces that we still use in tournament play. Cochrane was a well known name in the Calcutta (now known as Kolkatta) chess club as he played against several Indian players there while he lived in India. The first appearance of the Cochrane gambit against the Petrov's defense according to Wikipedia and my Mega Database was in the year 1848 against an Indian master Mohishunder Bannerjee.  (Source:  Chess.com)

Here is one variation of the gambit: 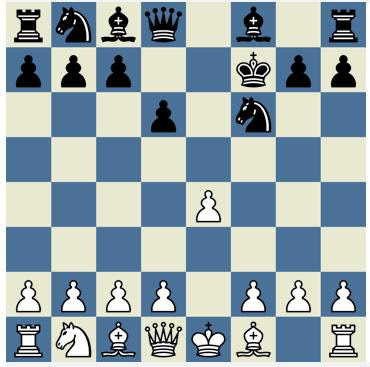 Black takes the bait.  Herein lies the trap of the Cochrane. 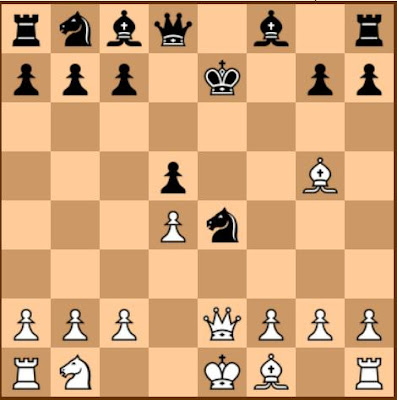 You may go to Cochrane Gambit Games.

Posted by Jun Fuderanan at 6:37 AM No comments:

The Danish Gambit, known as the Nordisches Gambit (Nordic Gambit) in German, and the Noors Gambiet (Norwegian Gambit) in Dutch, is a chess opening that begins with the moves


White will sacrifice one or two pawns for the sake of rapid development and the attack. However, with care, Black can accept one or both pawns safely, or simply decline the gambit altogether with good chances.  (Source: Wikipedia)

The text is part of the Danish Gambit Accepted. 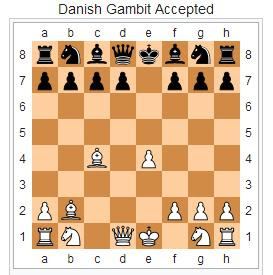 Analyzing the position, White has more active and developed pieces (e.g. Bishops), which, if Black is not careful, may be instrumental in assuring White's victory.

Taking advantage of his two Bishops,  White decides to open up avenues of attack. 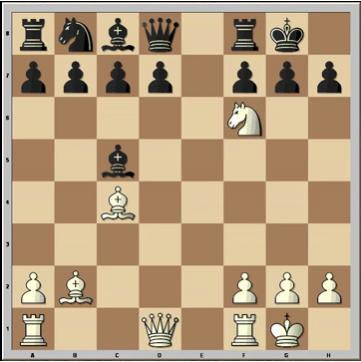 Usually, Black resigns immediately.  He has no solution to an impending mate.

For other variations, you may visit The Danish Gambit.

See some exciting chess at Brilliant Chess Games. Dazzling as they are short (25 moves or less), they provide instructional materials in openings and tactics.

What is the best gift you could give to a chess player? A chess book. We recommend Openings and Brilliant Games of Chess Grandmasters, a compilation of legendary brilliant chess games throughout history.